“I have been fortunate.”

Those words surface often as Bob Black recounts his life. Some would equate “fortunate” with “lucky” or “being in the right place at the right time.”  But, as the events of Bob’s life are examined, “fortunate” is a complex mixture of the right kinds of relationships, recognizing opportunities when they present themselves, and a strong personal work ethic.  Perhaps more important, it is the ability to take a long-term view of what can be accomplished when those three things intersect.

Born in 1930, Bob spent his early years in the Piney Creek community of Alleghany County.  His parents, Emerson and Alma, were both teachers at Piney Creek School.  In 1933 or 34, Bob’s father became the county agricultural agent.

Bob recalls that in addition to serving as a liaison between local farmers and North Carolina State University, his father also filled the role of veterinarian, giving vaccines and tending to sick livestock.  In those days, in addition to cattle, Alleghany farmers raised and sold thousands of sheep. Emerson would coordinate the sale and shipment of lambs to markets up north, taking truckloads of lambs to railroad docks in Galax or Wilkesboro.  In 1938, his father was instrumental in securing a loan from the Rural Electrification Authority to setup an electric cooperative which brought electricity to Alleghany County.

During his early childhood, Bob’s family moved to Sparta.  Their first home was on Main Street between the homes of Dr. Thompson and Dr. Burgiss near the current location of BB&T Bank.  The family later built the rock house that still stands across from the current Alleghany County Fairgrounds.  To supplement their income, the Blacks took boarders into their new home.  Bob describes those boarders as primarily school teachers and recalls that the first park ranger on the Blue Ridge Parkway was also a boarder. 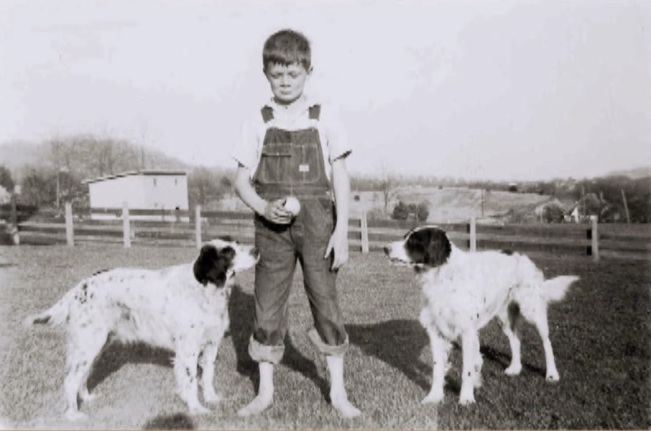 Bob’s childhood was filled with rich mixture of contradictions.  He inherited a love of hunting and fishing from his father.  Bob recalls that when he was 12 years old, he killed 67 squirrels that fall with a single shot .22 rifle.  He then describes that same 12 year-old as checking out an “arm load” of books each week from the library.  He followed his dad on farm visits, even learning to give vaccinations.  He could mingle comfortably with farmers and doctors and teachers.  Bob lettered in football, basketball and baseball in high school while balancing farm chores.

He followed his father’s example and went to college at North Carolina State where he was a member of the Reserve Officers Training Corps (ROTC).  After living in the dorm his freshman year, he spent his sophomore year living in the basement of the college gym.  His final two years were spent on the college farm where he rose at 4:00 am to work on the farm before heading out to classes.  During his time at Sparta High School, Bob was active in the Future Farmers of America (FFA) and participated in livestock judging.  He continued this at college and traveled the country judging livestock.

Bob’s summer jobs gave him with valuable life experience.  A college friend told him of going to Kansas one summer to work in the wheat harvest.  The friend gave Bob the name and number of the farmer. That summer Bob hitchhiked to Kansas, called the farmer and asked for a job.  At the end of the summer, Bob planned to visit family in Nebraska.  The farmer drove Bob out to the highway.  It took two hours for the first vehicle to come by.  Bob hitchhiked on to Nebraska and then back home.

The next year, Bob worked as a seasonal ranger on the Blue Ridge Parkway.  One night after his shift, he came into Sparta and spent the evening getting to know two men, Jim Lowe and Carl Buchan.  The two brother-in-laws owned Lowes Hardware and had opened a store in Sparta.

After college, Bob entered the U.S. Army in 1953, fulfilling his two year military commitment made with the ROTC.  He was commissioned as a lieutenant and soon found himself the youngest company commander at Ft. Knox.  He arrived in Korea after the truce and took part in the prisoner of war exchanges.

After fulfilling his military commitment, Bob returned home and applied for a job as county agent in Cleveland County.  As he worked through that process, Carl Buchan sent word that he would like to meet with Bob.  Bob interviewed with Mr. Buchan and went to work for Lowes the next day.

Bob started on the sales floor with Lowes.  He was successful in sales and was later moved to purchasing.  The work led him across the country to meet with manufacturers and supplies. He went on to become the vice president of purchasing.

Lowes was nationally known for its profit sharing plan.  Mr. Buchan felt that when employees owned shares of the company, they would be more engaged and productive.  As a result, many employees were financially able to retire after 20 years of service.  Bob followed this pattern, retiring in 1975 at the age of 45.  He viewed this as an opportunity to spend more time with his family and to spend more time outdoors.  It also begin a remarkable period of civic engagement.

Bob has been active in supporting NC State University.  He served on the Wolf Pack Club board for 16 years and was president of the alumni association.  He became close friends with coaches Norm Sloan and Jim Valvano.  Bob established two need-based endowments that supports six scholarships. He also supports four varsity sports scholarships, including the first for cheerleading.  In 2005, Bob was awarded the Watauga Medal for his “dedication and devotion to the advancement of North Carolina State University.”

In Alleghany County, there are few civic organizations or non-profits that haven’t experienced Bob’s touch.  He was a founding board member of the Chamber of Commerce and was instrumental in the recruitment of industry in Alleghany County.  Many of his private ventures such as joining investors in building the Alleghany Inn or purchasing the Alleghany News years ago, were driven more by a sense of civic duty that a desire for profit.  Bob views one of his greatest accomplishments as negotiating the donation of the current fairgrounds property from the Higgins family to the county. He is active in Mount Zion United Methodist Church in Piney Creek , a church his family helped found almost 200 years ago.

These days, Bob enjoys traveling with his wife, Carol – they have been married for 14 years.  They enjoy time with their families.  Bob reads four different newspapers and has maintained a subscription to Forbes magazine for over 50 years.

Bob and Carol enjoying a tuk-tuk ride in Bangkok

While Bob describes himself as fortunate, many others who can tie their good fortune to Bob Black and his family.  Countless students at both the college and high school level have been fortunate recipients of Bob’s generosity. Anyone who enjoys an event at the Alleghany County Fairgrounds can trace their good fortune to a conversation Bob had with Buck Higgins.  Local businesses who are assisted by the Chamber of Commerce are fortunate for the visionary leadership of Bob and others who had the foresight to form that local organization.

We are all fortunate that Bob Black is a part of our community.

2 thoughts on “Bob Black – A Life of Service”