Sparta is quite a ways from the seafood markets on the Outer Banks – somewhere in the neighborhood of 5½ to 6 hours.  Yet every Friday afternoon, Alleghany County residents can buy fresh seafood straight from the coastal waters of North Carolina.  This rare opportunity is kindled by a friendship that developed at Alleghany High School and a fueled by strong vision for the future.

Guillermo Camacho moved to Ennice in 2004 when he was eight years old.  His dad had moved here in 1989 and worked on a local dairy farm.  Guillermo began fourth grade at Glade Creek School and later attended Alleghany High School, graduating in 2013.

When Guillermo was a junior, Jordan Budd moved to the county and attended Alleghany High.  Guillermo and Jordan became friends.  Their friendship endured despite Jordan moving to Advance in Davie County after only one year in Alleghany.

Jordan’s family hunted and spent time in Hyde County in eastern North Carolina.  An acquaintance from Mattamuskeet Seafood suggested to Jordan that there was an opportunity to begin selling seafood in the Piedmont.  They worked through the details of how to transport the fish so that the product retained its fresh flavor.  Jordan contacted Guillermo and asked if he would like to join him in a business venture – OBX Seafood. 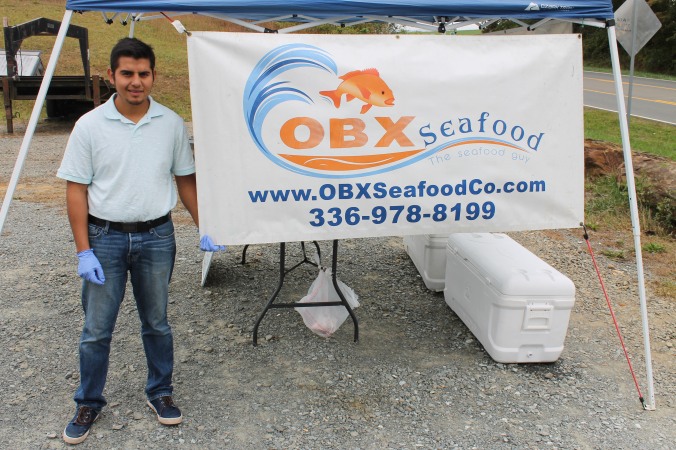 After initially buying solely from fish wholesalers (fish houses), Guillermo and Jordan began exploring along the coast with the goal of finding the highest quality seafood available.  They have since developed a network of contacts with fishermen from Manteo to Beaufort/Morehead City to Sneads Ferry.  Their weekly schedule is exhausting and illustrates their desire to deliver a quality product to the people of western North Carolina.

Monday:  Handle all the administrative functions, and clean their coolers and truck.

Tuesday:  Head east.  They begin calling their contacts as they travel toward the coast.  They check with the fishing boats to see what they are catching and what will be available.  They send this information out in an email to their customer distribution list and begin taking pre-orders.  Tuesday night they usually sleep in the truck or camp on the beach.  Guillermo refers this this as “getting salty.”

Wednesday:  They travel the coast buying straight off the boat whenever possible.

Thursday:  They travel home late Wednesday or early Thursday morning.  Once back in Advance, they spend much of the day cleaning fish and preparing them for sale.  They have several restaurants in the Winston Salem/Greensboro area that they sell to on Thursday for their weekend menus.

Friday:  Guillermo sets up at Hawks Produce on Hwy 21 just south of Sparta.  Jordan and his girlfriend sell at the farmers markets in Advance and Greensboro. 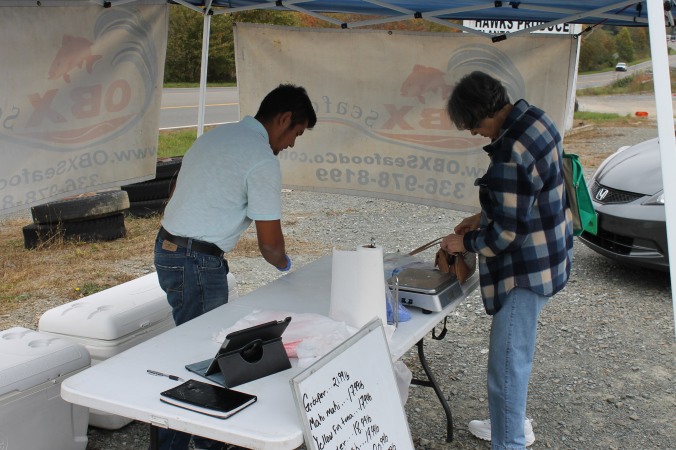 “There is nothing like fresh fish,” says Marie Carlson. “It is really great to have them here.”

Sunday:  They sell at the Greensboro Farmers Market.

On Monday, they start again.

Yet, as Guillermo describes the schedule, he doesn’t focus on the relentless grind or not having days off.  Instead, he is looks confidently to the future.

They are currently making home deliveries of pre-orders in Mooresville, Troutman, Advance and Mocksville.  They hope to expand this service and are exploring how to ship the product in a way that ensures that the fish maintains its freshness.  They want to develop better displays for their stands and hope to build a mobile “crab shack” that can be towed from one site to another.

Guillermo is a confident, 20 year-old young man who communicates well with his customers.  He can offer advice on how to cook a variety of seafood that results in an enjoyable meal.  He speaks of focusing on North Carolina products and protecting the environment.  He talks of growing their business into a large network that furnishes seafood across the state to a broad base of customers.  It would be easy to dismiss it all as a youthful dream, but it only takes moments to realize that this is no simple dream – it is a business plan with growth potential.

What spurs on Guillermo’s entrepreneurial spirit?  One could look to his family moving here to start a new life.  Perhaps, it was a teacher at Glade Creek School who shared with Guillermo that he could achieve anything he set his mind too.  Or maybe, it is something characteristic of Alleghany County where innovation has been a necessity, community relationships are a must, and there is a dogged reluctance to take “no” for an answer.

Go here to register for online purchases from OBX Seafood.  Or email them at orders@FreshFishNc.com for current prices and availability.