Those in the faith community realize (much to their chagrin) that their personal desires sometimes conflict with God’s plan for their life.  And even when there isn’t conflict in those desires, a member’s timing may not align with God’s.  For Tres Fordham, it took nearly 25 years to achieve that alignment.

A military brat, Tres was born in Germany.  He traveled the world with his family until his father retired from the Army and settled the family in Clemmons, NC.  Tres went on to the University of North Carolina at Chapel Hill and graduated in 1985 with a degree in Recreation Administration.  In 1989 he applied for the position of director at Laurel Ridge Camp, Conference and Retreat Center.

Laurel Ridge was founded by the Southern Province of the Moravian Church of America as a “location for relaxation, recreation, reflection and renewal.”  The original 115 acres was purchased in 1953 and summer camps began in 1960.  The facility has grown to 688 acres and is situated at the junction of Alleghany, Ashe and Wilkes Counties in the Laurel Springs community.

For a young man in the Moravian Church, a job at Laurel Ridge would be a dream come true.  But, the administration in 1989 wanted someone with a ministerial degree to fill the director role.  Tres was turned down for the position.

As often happens in a life journey, Tres changed directions and spent the next five years building houses.  Then, he switched again and went into the grading business.  After ten years in the construction field he questioned whether he was using his education and gifts in the proper manner.

He visited with the management of the YMCA in Clemmons and inquired about getting back into the recreation field.  He was given a job and encouraged to go back to school since much had changed in the previous ten years.  Tres enrolled in the University of North Carolina at Greensboro and juggled work, school and family for five years before receiving his graduate degree in Leisure Studies.  He worked his way through a number of positions before becoming the assistant director of the West Forsyth YMCA.  Then in 2003 he became the director of the new YMCA in Yadkin County.

Tres grew up in the Moravian Church.  The Moravian Church was organized in 1457 and began its reformation movement some 60 years before Martin Luther nailed his Ninety-Five Theses to the door of All Saints Church in Wittenberg, Germany.  That Moravian call for reformation can still be found in the church’s motto: “In essentials unity; in nonessentials, liberty; in all things, love.”  Those roots run deep for Tres and when the executive director position opened at Laurel Ridge, he applied once again.  This time the timing was right and Tres became the camp’s director in May of 2014.

The position brought with it a number of challenges.  Tres has found that many in Ashe and Alleghany Counties know little or nothing about the camp.  And those that do often view it purely as a retreat for Moravians.  So, he and his staff have set out to develop a higher community profile.

Campers come from varied denominational backgrounds.  Summer mission camps send campers out into the surrounding communities to conduct mission projects.  The center hosts an annual appreciation dinner for the Laurel Springs Volunteer Fire Department.  Events such as the Moravian Mountain Christmas are open to the public. The Higgins Lodge has 48 sleeping rooms and four meeting rooms. The Lodge hosts a number of events, conferences and retreats for a wide range of groups.  Those visitors can take in views from the deck that stretch for miles and hike miles of mountain trails.  Guests are encouraged to visit Sparta and to shop locally. Laurel Ridge has a true community orientation. 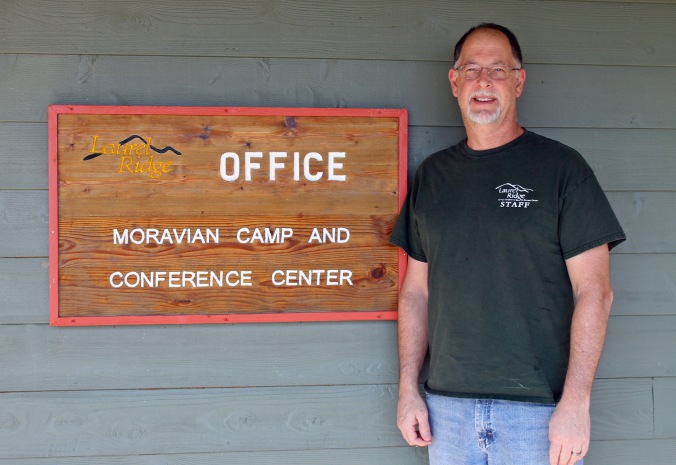 When faced with rejection we tend to ask the question, “Why.”  Yet, hindsight often gives clarity to those life events that make little sense when we are caught up in the moment.  A childhood of travel, 10 years of construction experience, and nearly 20 years in non-profit management creates a unique skill set. Couple those skills with a 600 year-old theology that emphasizes relationships with God and community, and Tres Fordham is ideally prepared manage Laurel Ridge.  It may not have made sense in 1989, but today the alignment is perfect.

If you are interested in learning more about ways you or your group can utilize Laurel Ridge or if you would like to recommend a summer mission project, contact Tres Fordham at 336-359-2951 or by email at tres@laurelridge.org

“Laurel Ridge is a mountain place set apart for forming disciples of Jesus Christ who learn and live in community to serve in the world.”