In social theory, framing is a schema of interpretation, a collection of anecdotes and stereotypes, that individuals rely on to understand and respond to events.  – – – Erving Goffman

Social theory tells us that we frame issues and events that arise as either problems or opportunities.  This goes well beyond whether we view the glass as half empty or half full.  Regardless of either perspective, there is still just a half filled glass in front of us.  Folks like Kim Caudill look at the glass and skip the half empty/half full question.  Instead they decide there is room for more, then set out to fill the glass to the rim.

Kim grew up a Louisburg, NC, a small town about an hour northeast of Raleigh.  She still carries a hint of an accent that is unique to those counties along the Virginia/North Carolina line in the Roanoke River Basin.  Her family was in the interior decorating business and often vacationed in the mountains.  Kim went on to graduate from Louisburg College and then Atlantic Christian College, now known as Barton College.  Marriage followed then a son.  She went back to graduate school at East Carolina University, balancing family and work responsibilities with night and weekend classes.

Her family settled in to a down east county and made their home in the community of Beautancus.  She taught school at the elementary level and they raised their son.  Then part of the fluid left her glass.

Faced with a divorce and her son joining the military, Kim was challenged by a new life and whether to frame this change as a problem or opportunity.  She opted for “opportunity” and contacted the  Department of Defense Education Activity (DoDEA).  One of DoDEA’s functions is to furnish teachers to military service members around the world.  Kim applied and was accepted for service.  She soon found herself in Germany. 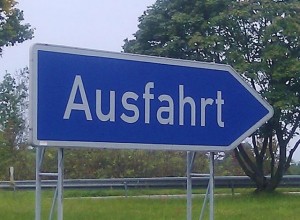 Being tossed into a new culture again generated the problem/opportunity dilemma.  Of course language was an issue.  Kim noticed that as they traveled the autobahn there was a blue sign with an arrow that pointed to “Ausfahrt.”  Kim remarked to her driver that the best she could tell, just about every exit off the autobahn led to Ausfahrt.  The driver explained to Kim that “Ausfahrt” was German for “exit.”  Kim realized quickly that part of filling her glass was to learn the basics of German.

Kim spent six years in Germany.  She enjoyed the ease of travel between the European countries.  She tells of driving trips to France and pottery shopping in Poland and a spring break in Greece.  Trips home to North Carolina were worked around the school calendar, with most trips falling on her summer or Christmas breaks.

After six years Kim returned to the United States and recalled those childhood trips to the North Carolina mountains.  She settled for a while in Ashe County, and taught school near Galax, Virginia and Moravian Falls, NC.  When a teaching job came open at Glade Creek Elementary, she moved to Alleghany County.  Along the way she married Laurel Springs resident, Bill Caudill.  After nine years at Glade Creek, she recently retired from teaching after almost 30 years in the classroom. 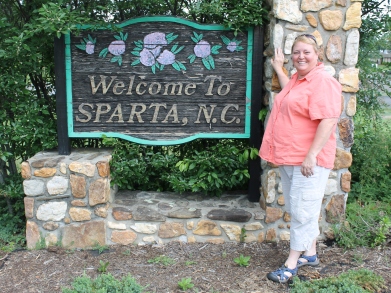 Retirement brought Kim another opportunity.  Once again she topped off her glass, this time by being named Main Street Coordinator with the Sparta Revitalization Committee.  An admitted extrovert, Kim looks forward to meeting the Main Street merchants and working to promote activities in and around Sparta.

Some view Sparta and Alleghany County’s cups as half empty and others as half full.  If her actions in the past are indicative of her future initiative, Kim Caudill will work to fill those cups to overflowing.