Even though the snow is lingering, the temperatures are creeping through the 40s toward 50 degrees.  Days like these generate a longing in trout anglers to pull on a pair of waders and hit the creek.  The North Carolina Wildlife Resources Commission (NCWRC) is fueling those desires by stocking trout in the Little River in Alleghany County.

NCWRC trout trucks at the Armstrong Hatchery near Marion, NC 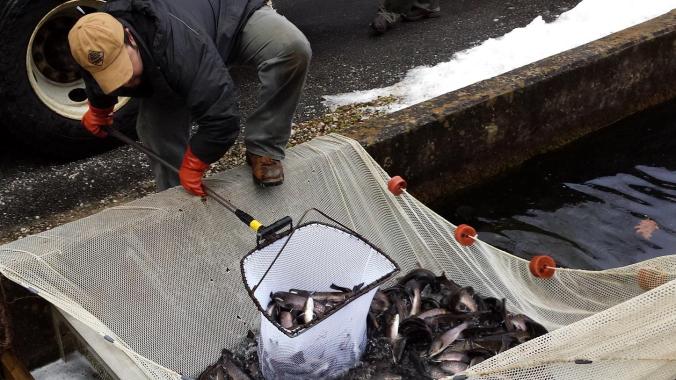 Regulations for delayed harvest streams require anglers to practice “catch and release.”  To help ensure that the fish are not injured, lures are required to only have a single hook.  Natural bait is prohibited.  A legal definition of natural bait can be found here.  Beginning the 1st Saturday in June, fish may be kept and natural bait is allowed.  This change takes place because release survival rates decrease as the waters warms.

In Alleghany County, a section of the Little River is designated as delayed harvest.  That section of stream is marked by black and white signs that list the basic regulations.  It includes a popular stretch of creek alongside the Rifle Range Road.

While most view trout fishing as a recreational pastime, others view it as an economic driver for mountain communities.  According to a 2008 study by Responsive Management and Southwick Associates, the NCWRC’s mountain trout program has a $174 million impact on the economy of western North Carolina and the state as a whole.  Those funds support almost 2,000 jobs and reach into virtually all mountain communities.

But to those who seek to shake the shackles of snow, ice and sub-freezing temperatures, trout fishing takes on an almost spiritual quality:

“In our family, there was no clear line between religion and fly fishing. We lived at the junction of great trout rivers in western Montana, and our father was a Presbyterian minister and a fly fisherman who tied his own flies and taught others. He told us about Christ’s disciples being fishermen, and we were left to assume, as my brother and I did, that all first-class fishermen on the Sea of Galilee were fly fishermen and that John, the favorite, was a dry-fly fisherman.”

Norman Maclean, A River Runs Through it and Other Stories

The weather is warming and there’s fish in the creek – it’s time to go fishing. 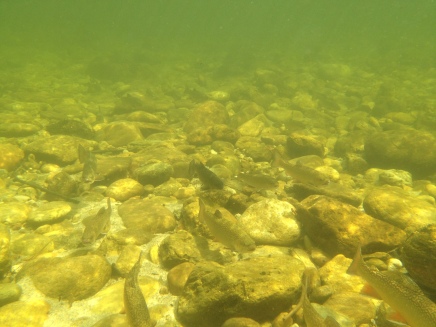