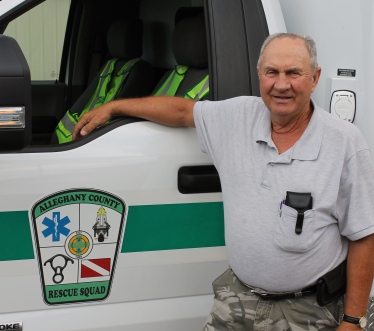 Gene Crouse tells a story that had all the makings of an impending tragedy. A lady over 90 years-old had left home and was missing in the woods.  Darkness set in and the temperature dropped.  A crew from the Alleghany County Rescue Squad spent the night searching the woods but were unable to locate the woman. Fortunately they found her the next morning, safe and sound.  She told the rescuers that she had gotten cold overnight and covered herself completely in leaves to stay warm. She added, “But, I hardly slept a wink with y’all out there stomping around all night.”

Gene laughs as he tells that story. As he approaches his 50th anniversary in the squad, there are other humorous stories that he can recount along with many others with more tragic results. A quick conversation with Gene reveals a professional who accepts the challenges he has faced, but prefers to focus on those incidents with positive outcomes.

In August of 1970, shortly after his discharge from the military, Gene joined the new Alleghany County Rescue Squad. Gene recalls that the squad’s response vehicle was a Chevrolet Suburban. They used a military litter for a stretcher so once a patient was loaded, the truck was so full that it was difficult to provide care for the patient.  In 1977 the squad bought its first ambulance and at that time the town and county began allocating funds to the group.

Over the next ten years, Gene worked at Sparta Pipes.  He said they were a great company who recognized the value of emergency services volunteers. He described work days where he clocked in only to receive an emergency call that kept him away his entire shift. Even though he was gone for the day, the company paid him for his regular work shift. Gene explained, “They recognized that our community depended on volunteers to staff the rescue squad and fire departments.  Allowing us to go on these emergency calls, on company time and be paid, was one way Sparta Pipes gave back to the community.”

By the late 1970s, Alleghany County had formed a paid emergency medical services (EMS) department.  In 1979, Gene left the pipe factory and became a full-time EMS member. He also remained a member of the rescue squad. 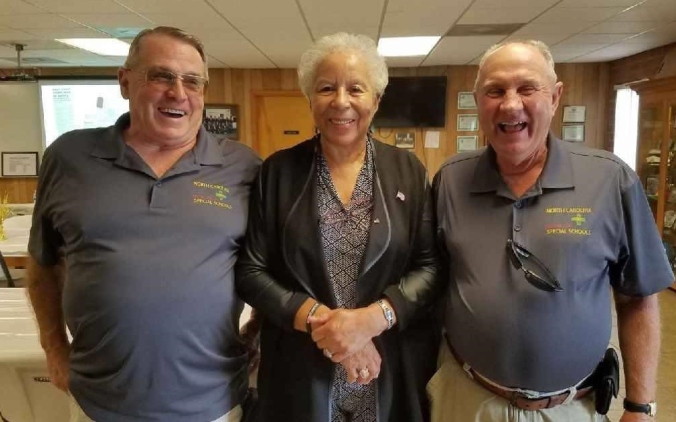 The roles of EMS and the rescue squad sometimes creates confusion for the public.  Gene explains it this way: “Think about an automobile accident that has the victim pinned inside the vehicle.  The rescue squad, EMS and fire departments will all be sent to the scene.  The rescue squad’s responsibility is to stabilize the victim while they are still inside the wreckage and then work to extricate them from the vehicle. The fire department will provide fire suppression and protection from fire, traffic control, and for those trained in extrication, assistance with freeing the victim. Once the victim is removed, EMS takes over medical treatment and transports the patient to an emergency facility.”

The complexity of these interlocking operations reflects the vast amounts of specialized equipment required to safely carry out each step of the response; the training required to operate this equipment and provide the necessary care; and the cost of both the equipment and training. Gene pointed out that that first Suburban cost around $3,000. The latest response vehicle purchased by the rescue squad cost well over $300,000. “Back in those early days,” Gene said, “We would go door to door in the community. Nowadays, we engage in a multiple fundraisers throughout the year. The cost is operating our squad is surprising to most people.”

Often overlooked by the public are the number of hours that squad members volunteer to the community. Gene explained, “When the [paid] EMS crews have to leave the county for medical transports, we call in rescue volunteers to be on standby provide medical response in the county. Coupling that with training and responding to calls for assistance, some of our more active members volunteer 40-50 hours each month.” 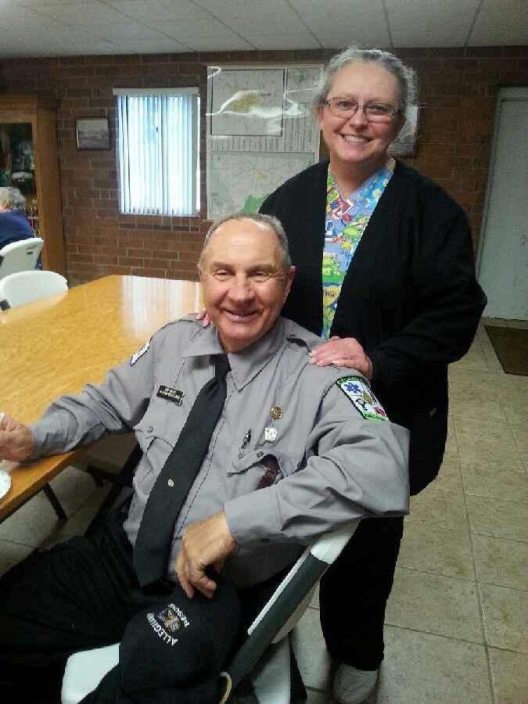 These days Gene spends much of his day on his farm in Cherry Lane where he raises beef cattle and donkeys.  But he still provides training for emergency responders and occasionally works a shift at EMS or runs a call with the rescue squad.  Even after 50 years, serving the community in times of need is still a key part of what defines Gene Crouse.